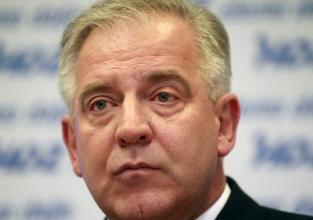 Croatian Prime Minister Ivo Sander resigned from all his political functions at a press conference held today at 14.00 hours. Sanader resigned as prime minister of Croatian government and chief of biggest Croatian political party HDZ. He said he is not ill, and added that his resignation is connected to problems in relation to Croatia’s negotiations with EU.

He said that his resignation doesn’t have to do anything with hard economical situation in which Croatia is, and that he was always a fighter. On Sanader’s place in government and HDZ should be appointed Jadranka Kosor, who was vice-prime minister in the government.

Along with Sanader, minister of education Dragan Primorac also resigned from government, as he announced that few days ago. On a journalist question is this is the end of his political carrier, Sanader answered no.

Some opposition politicians predict that new elections will be held because new government won’t be approved in parliament.