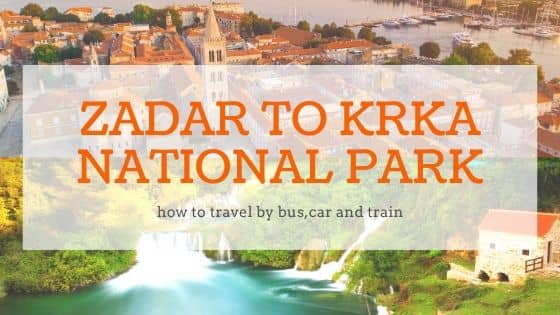 Croatia is well known for amazing nature and a number of national parks, especially if we consider the fact that it is a relatively small country when compared to other European countries. Krka National Park is the second most visited national park in the country, with Plitvice Lakes being the first, offering breathtaking views to emerald green lakes, waterfalls and cascades.

Prepare yourself for the trip and check the detailed plan of traveling between Zadar and Krka Waterfalls.

Zadar to Krka by bus

Bus connections between Zadar and Krka National Park are well developed as there are up to 13 daily departures from Zadar Bus Station to Krka and vice versa. Note that the number of departures is more frequent during the summer season, whereas the number splits in half, or even less, during the winter season. Travel time is usually between 50 and 75 minutes, depending on the traffic and hour of the departure.

Check more details about the route and purchase your bus ticket below:

Zadar to Krka by car

There are 5 official entrances to Krka National Park, but the two most popular among the visitors would be Skradin and Lozovac entrances. Other entrances are located at Roški slap, Burnum/Puljane, and Kistanje/Krka Monastery.

To reach Skradin entrance from Zadar, you will first need to take the road D424, join the A1 highway at highway toll Zadar-east and continue following A1 / E65 / E71 road for about 40 minutes. Toll fee is around 23HRK for a regular car (check price list for other types of vehicles). We also suggest to double check the list when travelling in July or August because the prices can be a bit higher during the peak-season.

Exit the highway at 21-Skradin and continue via D56 for less than 10 minutes to Skradin entrance.
If you want to take the Lozovac entrance, continue riding for about 10 minutes via D56.

The map below shows detailed instructions on how to get from Zadar to all five entrances by car.


Zadar to Krka by train

Renting a car to Krka

Visiting Krka Waterfalls by car is a great option if you prefer exploring the area on your own or if you don’t want to depend on fixed bus departures. In case you don’t possess your car while staying in Croatia, there are several car rental offices available in Zadar centre such as Avax, Enterprise, Uni Rent, etc. However, we recommend booking a car online so you can skip possible queues in rental offices.

Travel agencies in Zadar offer different tours to Krka National Park; the most popular one is a full-day tour, including transport, guide, insurance and breakfast or lunch box from €60. Note that most offers don’t include a ticket to the Park.

What to see on your way from Zadar to Krka

Krka Waterfalls are amazing and worth of visit at any time of year but shoulder-season could be the best time to visit the National Park because it is still not that crowded and the weather is perfect to enjoy the nature.

Although there is no official luggage storage to be found in Krka National Park, visitors can leave their luggage in Skradin in different travel agencies.

Bike transport on buses depends exclusively on the bus carrier. During summer season most bus companies will not accept bikes because there simply won’t be enough space for it in the luggage compartment. However, off-season it is possible to bring a bike if there’s enough space.

Visitors can do a boat trip from Skradin to Skradinski Buk waterfall and the transportation by boat is included in the price of the entrance tickets. Here you can check the schedule of boat departures.

Swimming is allowed in Krka National Park but only at Skradinski buk and Roški slap waterfalls.

Yes, riding bikes is allowed in Krka National Park, however, cycling is permitted only on marked bicycle trails, and on local paved roads. Cycling is not permitted on the walking trails.