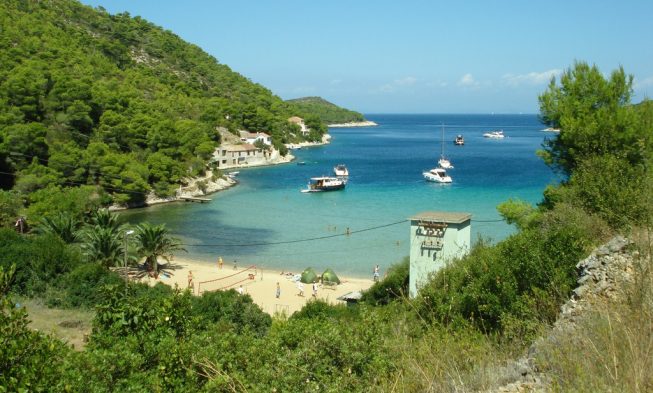 Vis Island, has some of the nicest beaches in Croatia, which includes several very nice sandy beaches.

City beach on a small peninsula extending for some hundred meters and is covered with fine gravel and pebbles. It is surrounded by tamarisk trees providing shade on hot summer days. Near the beach there is a restaurant, a volleyball and futsal court. The beach is only a few minutes walk from the center of the town.

The naturist beach stretches from the bay Stonac to the island Host. The beach is made of natural, sloping stone slabs and rocks in the northern part of the harbor of St. George. Access to the beach is secured by an asphalt road and shade can be found only at the beginning of the beach.

It is located at the foot of Fort George and it is the first external bay on the western part of the port of St. George. This beach also is intended for nudists, and is also made from natural, sloping stone blocks on both sides of the bay. The beach is approached by a road leading to the bays Parja and Rogacic and branches out into the vineyards. On this beach there is no shade. It is a beautiful sandy beach in the Grandovac Bay which is located at the eastern entrance to the harbor of Vis. The beach is surrounded by tamarisk trees providing shade on hot summer days and is ideal for families with small children. Nearby is a small coffee bar as well a sunbathing area that was built back in the 1930s. Near the beach is a once prestigious building, the so-called Czech villa, which was named after the Czech unionists who, as the new owners, rested in it between the First and Second World Wars. With the victory of antifascism, the Czech villa became part of JNA (YNA) whose officer corps resided in it for decades. Today the building is completely destroyed from the inside and witnesses the incredible carelessness and irresponsibility of maintaining historical military assets on the island of Vis in the past 20 years.

This beautiful beach is named after the eponymous lighthouse and cape, and is situated in a long bay of a small fishing and tourist village. On this sandy beach there is an excellent restaurant and beach bar, a playground for beach volleyball and lots of shade under the palm trees on the west side and under the tamarisk trees in the eastern part of the beach which makes Stoncica an ideal place for family outings. The roads from Visa leads to the paved trail with parking for cars from which you walk down to the beach. A sandy beach located at the end of the bay of the eponymous holiday village, in the southeastern part of the island. Although there is no natural shade, on the beach you can rent umbrellas and lounge chairs. Shallow water that reaches to the knees thirty meters from the beach, makes Milna the best beach on the island of Vis for the popular beach game picigin, an amateur sports game that involves several participants forming a circle and keeping the in the air as long as possible. There are two roads that lead to Milna: The old road through Podstrazje and the new through Stoncica.

This is certainly one of the most beautiful beaches on the Adriatic coast with bright, glistening sand. This beautiful beach of your dreams is a perfect place for those who want to escape the summer crowds and enjoy the peace, quiet and crystal clear waters. If you are annoyed by the heat, you can find a place in the shade under the thick treetops of pine trees which are located behind the beach. On the beach there are no facilities apart from the restaurant where you can freshen up and enjoy a variety of local specialties.

Another sandy beach on the southeast coast of the island of Vis. Smokova is the second in a series of bays after Stoncica in direction southeast. This beach is a famous destination for boaters and lovers of natural beaches. At a distance of only two meters from the coast, in the eastern part of the bay, about 100 meters from the beach, there are submerged remains of the wings of an airplane from World War II. The shade on this beach can be found under pine trees, a little deeper inland.

This beautiful beach is named after the silver shine of its pebbles under the moonlight. This is also the most famous beach on the island of Vis. Rich in pine trees, Srebrna is the most common choice for families with children. Large and spacious stone tablet which slopes down to the most beautiful beach in the western part of the island is partly covered by pine trees. A large parking area is located only 250 meters from the beach. Another pebble beach, popular among children, is located on the southwestern part of the Vis cove, right at the foot of a small fishing and tourist village Rukavac. And even though the shade can be found only in a small pine forest above the beach, large stones in the northern part of the bay are in the shadow after 17 hours.

This beach is made of stone blocks that just like cascades follow one another, making visually separate units starting from the Eastern Cape of the Srebrna Bay further to the east, all the way to the Cape of Punta Polivalo. This beach was discovered by naturists and it is inscribed as the best nude beach on the map of the island. A pathway through the pine forest leads from the parking lot across the clearing which is located above the Srebrna Beach in direction south.

This is a beautiful little cove situated on the southern part of the island, surrounded by sloping plains that slope gently into the crystal clear water which is always a few degrees cooler than at the nearby Srebrena. The reason for this is the fresh water in the bay as well as the ever-present western current that converts shallow water around the reefs into small current rapids. The beach Little Travna be reached following the path.

West of Mala Travna lies this magical bay surrounded by high stone cliffs that dive into the crystal clear waters. Between the cliffs there is a small sandy beach that is only visible after you sail through the “gate” of the magnificent rocks. The beach Stiniva is reached by very steep goat trail, so it is not advisable to take small children. Given the fact that all sides are surrounded by high cliffs, Stiniva is always at least one half in the shade.