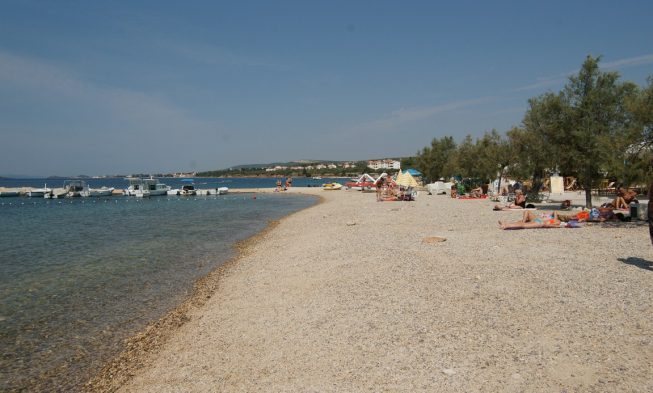 Biograd na moru, a city and port, is located in the northern part of Dalmatia in Pasman Bay located 25 km south of Zadar. The city is located on a small peninsula and the mainland, and is known for its beautiful beaches and a variety of small islands located in the gulf to protect the city from the strong gusts of winds. This section is one of the most indented parts of the coast, so Biograd na Moru and its environment are a very attractive destination for boaters. Biograd marinas have 1000 berths and 200 places on the land and are open throughout the year. In the immediate vicinity there are three national parks: Paklenica, Kornati and Krka, as well as Nature Parks Telascica and Lake Vrana. 5500 inhabitants live in Biograd.

Biograd is known for its beautiful beaches and crystal clear waters.

Drazica Beach, the main beach, is only 10 minutes walk from the city centre. It has a Blue Flag, the international award for quality of service and purity of the sea. Drazica Beach is a pebble beach 300 meters long. Beach has adjusted entrance for people with disabilities. Behind the beach is a thick pine forest that provides natural shade on hot summer days. On the beach there is a aqua park with pools, which is a little paradise for children. The beach is equipped with showers, changing rooms and toilets, and you can also rent chairs and umbrellas. The beach has a cafe bar and restaurant where you can refresh yourself. Inside the camp Soline there is a pebble beach Kumenta. The beach is ideal for those who do not like large crowds on the beaches. At the bottom of the sea it is possible to find sea urchins, so children should have footwear for the sea.

Pebble beach Bosana is located near Marina Kornati. The beach has a good access to the sea and it is equipped with showers and cabins. The beach has a playground, volleyball on the sand, a few restaurants and shops.

Crvena Luka Beach is located in the eponymous bay, which is located 5 km from Biograd towards Pakostane. Next to the beach is a parking lot which is charged. This beach was voted one of the most beautiful beaches in the region. Opposite Biograd is the island of St. Katarina which is a favourite destination for nudists. There are no regular shipping lines to the island, but on the beach Bosana you can rent a boat or jet ski to reach the island.

Biograd is a popular tourist destination with a long tradition, so in Biograd there is a great selection of accommodation in hotels, private apartments, villas or in the camps. Biograd has 3 large hotels: Hotel Illyria, Adriatic Hotel and Hotel Kornati and several small family hotels.

Camping Soline is the largest camp with a total capacity of 3000 people. There is a possibility of accommodation in mobile homes in the camp that are equipped according to the highest standards. The camp is located near the town centre which can be reached by the newly built promenade along the most attractive Biograd beach.

Biograd has one of the largest and best equipped tennis camps in this part of the Adriatic;14 tennis courts with clay and 6 hard courts. It is located in a pine forest at the beach.
Besides Camp Soline, Biograd also has several smaller family camps.

What to do in Biograd na Moru

The geographic location of Biograd offers various opportunities for an active and memorable vacation. In the town we recommend you visit the town museum, the Baroque parish church from the 17th century and the remains of a Roman villa. Due to its proximity to the National Park Kornati, we recommend a day trip and tour of this unique archipelago. Vrana Lake Nature Park is just 7 km from Biograd and an ideal destination for lovers of fishing.

In the season Biograd lives 24 hours a day, so that after relaxing by the sea in one of the restaurants you can continue the fun in numerous nightclubs and cafes that are open until the early morning hours.

How to get to Biograd na Moru

Biograd na Moru is by the coastal road very well connected to the rest of the country. If you arrive by plane, there are two airports you can chose between: Zadar airport which is 20 km away and the airport in Split which is 120 km away.