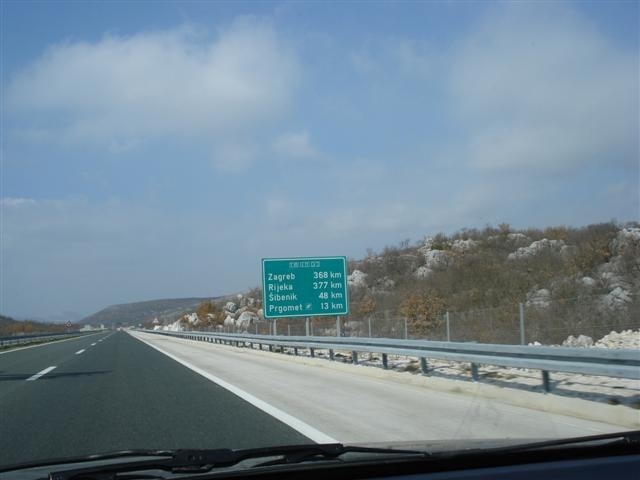 The new highway is meanwhile more or less completed, which means that turist arriving in Istria from Italy or Slovenia can access the Istrian “Ipsilon” by the border crossing in Plovanija from where the highway A9 is connected to Pula at the south peak of the peninsula. Arriving from Austria one would properly enter Croatia at the border crossing in Rupa; upon entering Croatia they will be on Motorway A7 which connects to the Istrian highway (A8) in Matulji which goes straight across Istria and intersects with the A9 in Kanfanar (Close to Rovinj). As already mentioned, the Istrian Motorway is also called the Istarski Ipsilon; looking at a map it is quite obvious why the Istrian highway got this name; A8 and A9 build an almost perfectly shaped Y. The total length of the 4 lane Istrian Highway is 140 km.

With the completion of the Highway in Istria, the traditional summer traffic jams will hopefully be history. The only place where this still may occur is by the Milna bridge.

As mentioned, the highway A9 streches from Plovanija in the north to Pula in the south of Istria. The A9 has a total length of about 75 km and on the A9 you have the following highway exit points:

Rest areas on the A9

As mentioned, the Highway A 8 starts in Matulj, east of Rijeka, and ends in Kanfanar where it connects to the A9. On the A8 the following highway exit points can be found:

On the Highway there are tree rest areas in each direction

Toll fees on the Highway in Istria

The amounts of toll which apply depend of the type of vehicle, the toll fees are divided in the following categories:

Category: IA – Motor vehicles with the characteristics of motorcycle, motor tricycle and quadricycle

Category I – Vehicles with two axles, the height to 1.30 m measured at first axle, except for motor vehicles from IIb

Category III – Motor vehicles with two or three axles of height greater than 1.30 m measured at the first axis, a maximum mass exceeding 3500 kg, including motor vehicles of category IIb with a trailer

Click on the pictures below to see Toll fees

For those who are planning to drive around in Istria, we can recommend to buy an ENC device which is a charging device enabling “drive through” charging at separate lane at the toll stations. The ENC device can be bought on several petrol stations along the highway. The device currently costs 100 Kuna (13 €); by first purchase a minimum of 200 kuna prepaid toll has to be added to the device, which has to be spend within 90 days. For holders of an ENC device, there is a 50% for passing the Ucka tunnel and 30% discount on other parts of Istrian Highway.