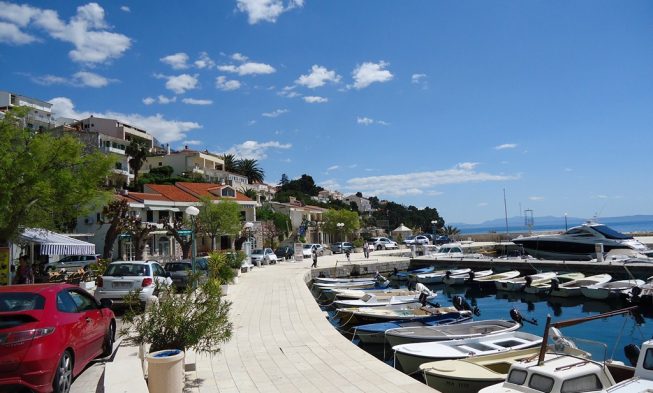 Brela is the first tourist town on the Makarska Riviera when arriving from north. Brela has a population of about 1.900 people; 150 of them live in Gornja Brela, the upper part of the town which is situated on the mountain inside the border of Nature Park Biokovo. The lower newer part of Brela is situated by the sea; this part of Brela consists of several small settlements, Soline and Donje Selo being the largest ones; this area has a population of about 1.750 people.

The highlight in Brela is undoubtedly the beaches which are among some of the most beautiful beaches in Croatia. In total Brela has 6 km of pebble beaches stretching along the coast.

The most well-known beach is Punta Rata. This beach was featured in Forbes magazine as one of the most beautiful beaches in the world. But in general all the 6 km of beach are really fantastic. Large pine trees can be found at or just behind the beach, so you can always find shade.

If you like to do a bit of snorkelling you will love Brela. Along the beaches in Brela you have restaurants, coffee bars, shops selling fruit and souvenirs.

TIP: If you wish to park close to the sea you have to arrive early, like between 8 and 9 am. From the main road just follow the fairly steep road towards Brela centre, turn in direction Hotel Bluesun Marian (here you have a gate and have to pay for the parking), the person at the gate will tell you where to park. When this parking is full, people park on the road leading down to Brela (also here you have to pay), which means you will have to walk quite a bit.

In Brela there are several hotels directly at the sea, like e.g Bluesun Marina, Maestral and Bluesun Soline. These hotels are situated between the city centre and the Punta rata beach. Of course there are also quite a few apartments for rent in Brela, majority of them are situated on the hills cascading down toward the centre and the marina. Stand alone holiday houses with or without pool are rare in this area.

Recommendable is the restaurants Volat, Mediteran und Burin, as well as Konoba Ivandica Dvori and Galinac. If you feel like eating a great pizza, Bistro Marko is the place to go. The best ice cream can be found at Roma.

Almost all the activities available are concentrated on the waterfront, here you have options to do paragliding with a boat, ride on a banana boat or other devices.

From the centre there is a fast boat offering a ride along the beaches and a visit to Brac, where you can swim a bit. Also there are glass boats and boats for rent.

A must do is a stroll along the sea side promenade

From Brela you have the following options for a day trips.

Close to the marina there are two smaller supermarkets where you can buy regular daily goods; if you are self catering and need to shop for a weeks holiday, you will find larger supermarkets in Makarska.

In the early evening hours, you can enjoy at the coffee bars along the sea side; for late night parties you will have to go to Makarska where you have several discotheques.