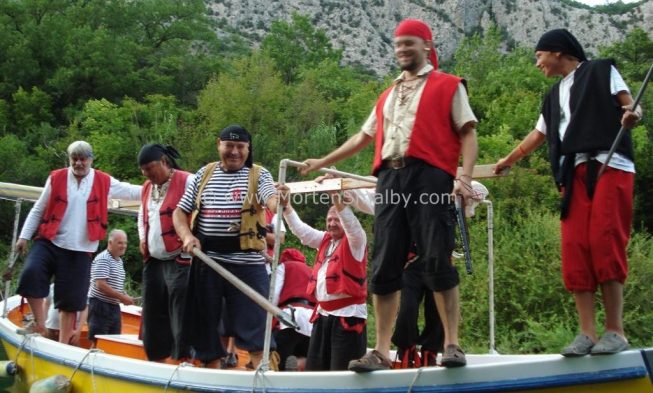 From the 12th to the 14th century Omis was a dangerous place for ships to pass by, as the city was ruled by Pirates, during more then two centuries trade ships and other Wessel who encountered the Sagittas (the Arrow – special Wessel build for fast attacks and ever faster retrieval) was often attacked and defeated by the Omis pirates.

The base of the Pirates was a few km up the Cetina river from, where the up to 250 meter high cliffs of the canyon gave them an excellent protection from attackers, the crusaders as well as the Turks, learned in unsuccessful attacks, that that the Omis pirates was the true rulers of the Cetina canyon.

As a new thing this year, tourist now has option to step in to the footpaths of the Omis Pirates, by joining the pirate nights at river Cetina, the pirate evening includes a sailing trip up river Cetina and an evening together with the pirates at Kaštil Slanica, as I heard about this tour I decided to take Caroline and Ida.

So last Tuesday we had reserved 3 places for the Pirate nights, the girls was of course trilled to go, already in the car from Split to Omis I was bombarded by several questions like – daddy are the pirates real, daddy is it dangerous etc.

The tour starts at 19:30 so we arrived at the starting point at 19.15, the starting point is very easy to find, when you come from Split you turn left just after crossing the Cetina bridge, 50-70 meter up the road (see picture), you have the boat on your left hand side, if you come by car you can park car on the big parking place just before the bridge, parking is 4 kuna and hour. At 19.30 our sailing trip up river Cetina started, as you can see on the pictures below the nature is very beautiful.

After 40 minutes we arrived at Kaštil Slanica, Caroline and Ida was a bit disappointed when they saw there was no pirates there, but their disappointment ended rapidly when suddenly shots was fired behind us……. we where under attack by the Omis Pirates. When the pirates boarded our boat Ida got a bit scared, but after I explained here that it was actually not real pirates, but more like actors, she found it very exiting.

At the Kaštil Slanica all guest and the Pirates was welcome with a magnificent buffet which among other included, Peka, grilled fish, several meet dishes and Fritule and of course drinks for both kids (juices) and adults (Wine, water), Ida and I fell in love with the grilled trout which was really excellent and Caroline tested a lot of Fritule, the girls got a bit speechless when two pirates joined our table and pulled out all their weapons, but after a while even Ida was sitting with a pirates gun in her hand.

After the nice buffet, it was time for dancing and pirates games which among others included arm wrestling, as you can see at the pictures below the girls ended up being fully confident with all the pirates, at one point of time I asked Caroline if she didn’t think that the pirates was nice although it was not “real” pirates, she replied to me, daddy this is real pirates, I know it is not pirates like in the old days, but this is today’s real pirates!

At 11 pm it was time to go back with bus to Omis, the girls was complete exhausted,  both they and I had a wonderful evening, of course 10 pirates armed to the teethes with guns and knifes can be overwhelming for kids, but these pirates where really excellent in dealing with the kids, so the girls fall a sleep with a smile on their face.

For smaller groups a pick up in mini bus e.g. in Spit can be arranged.

What to bring, Camera and maybe sweater as it can be a bit chili late in the evening, if possible dress up the kids as pirates.

PS: after listing to Pirate stories for 4 days, I yesterday had to take the kids to Omis  to buy some pirate equipment, they explained me that they needed it  for school and Kindergarten when they should tell about their encounter with the Pirates from Omis.