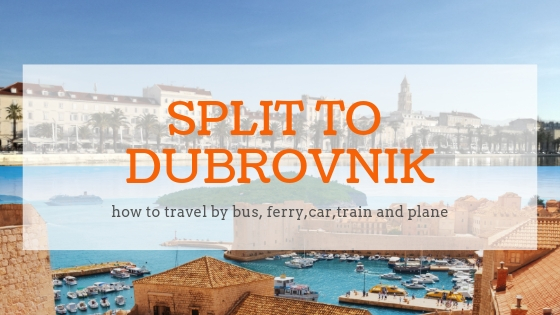 Traveling through Croatia can be easy if you prepare your trip on time. That’s why we’re giving you a detailed plan of traveling between Split and Dubrovnik. The two most beautiful “pearls” of the Adriatic Sea are in the top 5 visited places in Croatia due to their exceptional cultural heritage and an absolute must-visit during your stay in Croatia.

VERY IMPORTANT: Croatia has a very particular border on the southern part of the country. Namely, Croatia is partly divided by Neum Corridor, a 9km long stretch that belongs to the territory of Bosnia and Herzegovina. Many tourists are not aware of this when they are travelling to and from Dubrovnik.

What to expect? → There are two lines at the border: one for those entering Bosnia and Herzegovina and the other for travellers who are just in transit. As far as we’re informed, if you are a citizen of EU, identity card or passport will be accepted at the border. Some non-EU countries can only cross the border with the passport while others might need multiple entry Croatian visa. If you are in a doubt about needed documents for the Neum border crossing, please contact the local authorities. In case you want to avoid the border, you should know that this is also possible. You can board car ferry in Ploce and go to Peljesac and continue your journey to Dubrovnik carefree (more info about this in “By car” section).

Here are all the possible options of traveling between Split and Dubrovnik:

Bus connection between Split and Dubrovnik is very well developed.There are up to 20 daily departures between the cities during the summer season, during winter season about half the number. Travel time ranges from 3.5 to 5 hours, depending on which route the bus travels, the slower buses mainly drive via the coastal road, which is one of the most beautiful bus rides in Croatia.

If you prefer traveling by car, you should know that there are two options:

1) with border crossing in Neum – if crossing the border with Bosnia and Herzegovina is not a problem for you (regarding documents, etc.) then you can travel from Split to Dubrovnik:

2) without border crossing and by car ferry – this option is a bit trickier and it’s not often used but it’s still possible to do it if you want to avoid passing the border. The route from Split to Ploce is the same (via highway or via state road). And then you board the car ferry line Ploce – Trpanj (Peljesac)

In the map below you can see all three routes listed above and choose the one which suits you the most:

There are currently two ferry companies which have catamaran line Split – Dubrovnik: Kapetan Luka and Jadrolinija.

In the table below you can see departure times of catamaran lines between Split and Dubrovnik.

Traveling between these two cities is also a possibility but it’s not really among the “most popular” option since there’s no direct flights from Split to Dubrovnik. All flights from Split to Dubrovnik and vice versa make a stop in Zagreb Airport and the journey can last a lot longer than it would last if you, for example, traveled by car or bus. Also, the flight tickets are extremely expensive. However, if you don’t mind having 5-7 hours between two flights, you can use them to visit Zagreb shortly and spend those extra hours in the best possible way!

If you don’t have your own car, you can rent one at numerous car rental offices in Split such as Sixt, Avax or Oryx. Car renting is also possible directly at Split Airport. However, if you want to avoid queues and use the most out of your vacation, we recommend booking your car online. You can choose between several pick-up points in Split such as: Split Airport, Split Central Railway Station, Split Port, Split City Office and any hotel within city limits.

Although it may sound expensive, hiring a private transfer from Split to Dubrovnik is actually not that pricey. For one thing, you’ll avoid extra costs such as paying highway fee, fuel, etc. Private transfer is ideal for families or group of friends. An approximate price for a group of 4 to 8 people would be €225 , which if divided in 8 costs around €28 per person which is actually a very good price for this trip.

Island hopping from Split to Dubrovnik

If there’s one route that perfectly suits island hopping in Croatia, then Split – Dubrovnik should at least be in the top three pick. A day or two on each island should be enough to do a week long island hopping. You can do your island hopping trip as proposed:

Things to do or visit on the way to Dubrovnik