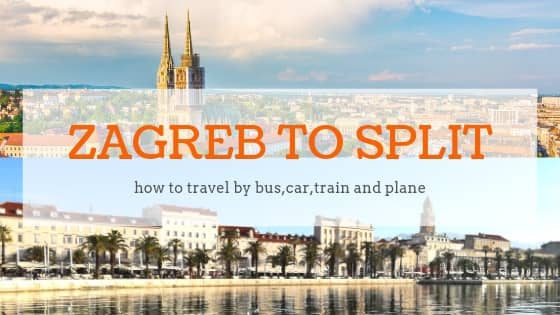 Getting from Zagreb to Split and vice versa is the most common route in Croatia since it connects the two biggest cities of the country, also connecting continental and coastal region. It is good to know the travelling options before your trip, so here is the detailed plan of travelling by each mean of transport.

The distance between Zagreb and Split is around 400 kilometers, and driving is a common way to get from one city to the other. There are two ways you can reach Split by car, by using the highway route or by avoiding it, using the local roads:

Driving from Zagreb to Split and vice versa became easier and quicker since the construction of highway route, also called ‘Europe’s most beautiful highway’, via which the ride takes around 3-4 hours, depending on the traffic. You enter the A1 motorway in Zagreb where you pick up a ticket and exit in Dugopolje (20 minutes away from Split) where you pay the toll fee which is 181 HRK or 24 € (2019) for a regular car (check pricelist for other vehicles). Also, we suggest you double check this list if travelling in July and August because the prices can be a bit higher during the peak tourist season. There are many stops on the way, but the most famous one is called Macola, there you can take a break and refuel yourself.

NOTE: Sometimes, due to the bad weather conditions such as strong wind bura, some sections of the highway may be closed meaning you would need to get off the highway and continue using the local roads being able to join the A1 again near Zadar. Also, during the peak season, prepare for the long queues at Sveti Rok, so you might consider the option below if travelling during that period.

There is also an option which avoids A1 motorway by going via D1 route, in that case you travel via local roads which makes a ride much longer, up to 6 hours. Still, this route is often used in case you want to stop to visit Plitvice lakes, which is very common while travelling on a relation Zagreb – Split. So, if you have some extra time, we suggest you visit this biggest attraction of the country (more sites in the section ‘Things to do or visit on the way to Split’). NOTE: As already stated, very little number of people uses this road since the A1 motorway, so when the season hits, this route can be even quicker than the highway.

You can check the details and purchase your tickets below:

It is also possible to travel by plane between these two cities and you can find daily direct flights operated by Croatia Airlines company. There are several departures per day.

If you don’t have your own car, you can rent one at numerous car rental offices in Zagreb such as Sixt, Europcar, Nova or Enterprise. Car renting is also possible directly at Zagreb Airport. However, if you want to avoid queues and use the most out of your vacation, we recommend booking your car online. You can choose between several pick-up points in Zagreb and most of them can be found in Zagreb Downtown.

Hiring a private transfer from Zagreb to Split is also an option, especially if travelling in a group. Booking a vehicle for 8 people can cost 440€ and you don’t have to think about departure schedules, paying highway fee, fuel etc. Also, you can choose any meeting point or even get picked up directly at the airport.

Things to do or visit on the way to Split

As we said, sometimes people choose going from Zagreb to Split via local roads on purpose. Besides that it can be a quicker option during the peak-season, this route is great if you want to make a stop to some of the places on the way, but you can do the same on the A1 motorway just by getting off at the right exit. Here are our suggestions: