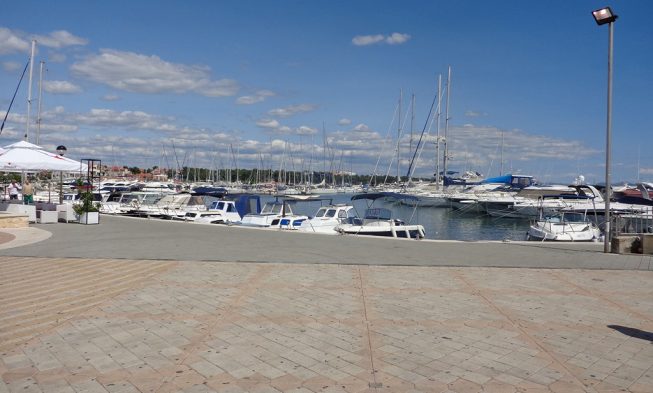 Vodice is a famous tourist destination at the Adriatic coast of Croatia, known for its vibrancy, diversity, tourist attractions and friendly people. The city is located along the coast in a wide bay, 11 km northwest of Sibenik, the center of the county. Today Vodice has almost 9,000 inhabitants and is the ideal place for vacation where everyone can find something for themselves.

The first settlements developed in the background in prehistoric times. It seems like Vodice was part of important Roman trade routes along which many settlements originated. Numerous archaeological excavations have revealed the remains of Roman settlements and Liburnian necropolis from the 4th century BC.

In Vodice you can find many different beautiful beaches. The small town offers all types of beaches, gravel, concrete or rocky beaches, so everyone can find a beach they like. If you need an escape from the summer heat, you can search for one of the pine forests, where you can enjoy the beautiful Mediterranean smell in the shade of the trees. Here you can find a small overview of the beaches in Vodice.

Plava plaza (Blue Beach): This beach is awarded with the blue flag, the symbol for top tourist services based on clean water and the beach quality. This pebbly beach stretches from Punta to Tribunj. The sea is on most parts of the beach quite shallow, which makes it perfect for families with small children and non-swimmers. At this beach you can find many restaurants and bars, the most famous is the Hookah bar.

Hangar Beach: This beach is one of the best equipped beaches on the Adriatic coast. This pebbly beach offers something for everyone. Besides the beautiful sea and the sun there are plenty of activities for people of all ages. For older people and families with children there is a quiet part of the beach where you can find a train for children, trampolines, air castles, carousels and other facilities for children. During the summer a scuba diving and sailing school for children is organized. 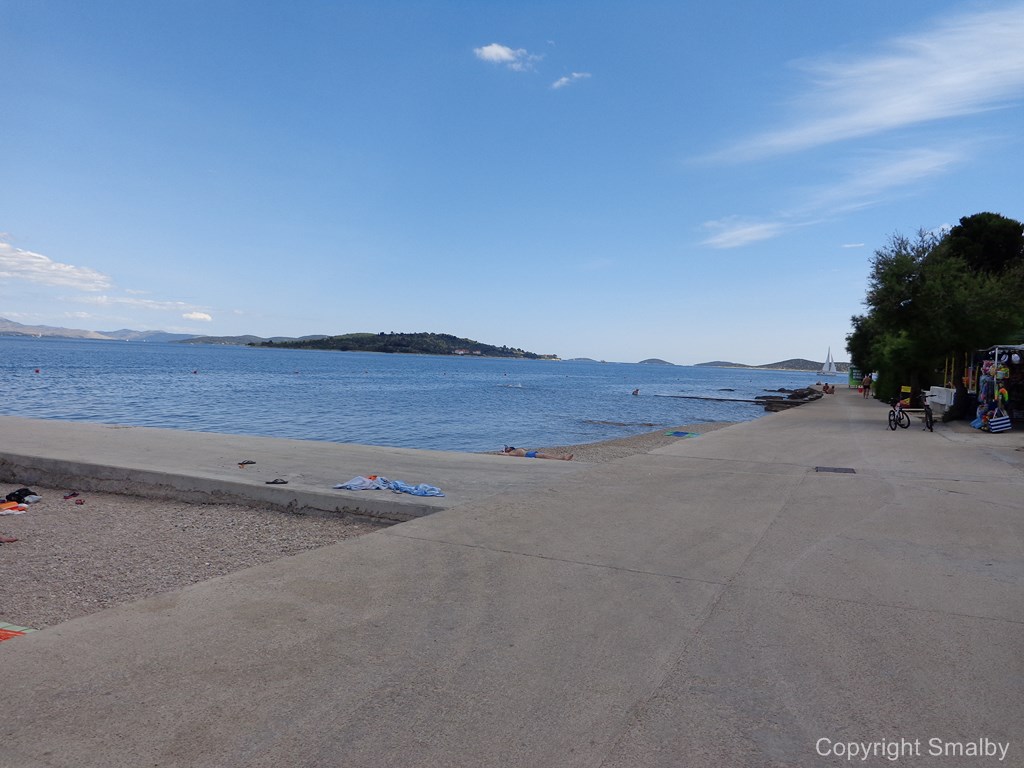 The younger population can be found near the popular bar Hookah, which is responsible for the music all day and all night long. After beach parties are also organized here, but also foam parties, techno parties and many other things.

On the beach there are four café bars, a restaurant, a fast food, a healthy food shop and shops with sports and sea equipment, outdoor showers, public toilets, changing rooms and there is a possibility to rent chairs and umbrellas.

Beach Srima: Beach Srima is situated near Vodice in the resort Srima and is an excellent choice to escape from the crowds on the main beaches of Vodice. The Srima beach is a pebbly beach and stretches for almost two kilometers from the end of Vodice along the whole Srima. On the beach in Srima there are no pine trees, so it is important to prepare the sun protection.

Vodice is one of the most popular tourist destinations on the Adriatic Coast of Croatia and it is getting more and more popular every year. Like most of the tourist destinations in Croatia, in Vodice you can find all types of accommodation. You can enjoy your vacation in one of the beautiful hotels, where you can enjoy all of the offered services, or in one of the comfortable apartments or rooms which you can rent. Nature lovers can spend their vacation in a camp.

One of the popular hotels is the three-star-hotel Imperial which is located at its own beach and surrounded by a park with beautiful Mediterranean plants. The entire complex has a capacity of 420 rooms and 15 suites. Most of the hotel rooms have air-conditioning and are located at the sea side. All of them have a balcony and are equipped with satellite TV and telephone.

Another popular hotel is the four-star-hotel Olympia. The hotel is located only 500 m of the center of Vodice and 50 m from the beach. This hotel is the perfect combination of traditional and modern style. The hotel has 241 accommodation units in two buildings. Altogether, the hotel offers 215 rooms and 26 suites with heating and air conditioning.

Since many of the inhabitants of Vodice make their living from the tourism, they invest a lot in improving the standards of tourism. This is particularly visible in the private accommodation which is offered in Vodice. There are many apartments which can be rented. You can also rent single rooms in private houses; this is a popular solution for people who are not planning to stay longer in one place.

If you prefer to spend your vacation in nature and you prefer campsites, you can choose between few campsites. The Imperial Camp is located on the coast, on the beach in a fragrant pine forest. It is a three-star camp and has a capacity of 145 pitches for 400 guests and 6 mobile homes. Camp guests are allowed to use all the facilities of the hotel Imperial: a la carte restaurant, snack and cocktail bar where they can enjoy the rich variety of dishes and beverages prepared in a traditional way. Others are Camp Dom, only 60 m from a beautiful pebble beach, Camp Bagic, Camp Grubelic, Camp Ivona very close to the city center, dominated by a centenary oak forest, providing deep shade and many leisure activities, Camp Mijat, Camp Phoenix, Camp Srdarev, Camp Rutke, a small family-owned Camp Šime, Camp Roko is also a family-run site located directly by the beach in Srima, and Camp Oliva.

What to see and do in Vodice

If you are interested in the heritage of Vodice you should visit the Church of the St. Cross which was built in 1746 by the famous master Ivan Skok. It is one of the most important baroque buildings in Dalmatia. The construction of the bell tower took 20 years and was built in 1752. The harmonious facade with a magnificent baroque portal and rosettes was dedicated to the Holy Cross.

Another beautiful church is the Church of Our Lady of Carmel which was built in the 17th century. Behind Vodice is a hill called Okit on top of which is a church. The church was destroyed over the centuries several times. The current design of the church was done by the renowned architect Nikola Basic who also designed the Sea Organ and the place Greeting to the Sun in Zadar.

Another important historical monument is the Coric Tower which was built by the rich family Fondra in 1646. The high-quality stone, from which it was built, was transported from the island of Brac. Since it was built in times of turmoil, the residential and commercial facilities were surrounded by high walls. Today, you can not enter the tower since it is in a weak, dilapidated state, but you can in summer enjoy movie and theatre performances in the backyard.

Also, don’t forget to visit Church of St. Elijah the Prophet, built in the 13th century by the inhabitants of Pisce, and in which a mass is held only once a year, on August 20th, and

Vodice has a great geographical position, that’s why it is a great place for day trips. From Vodice it is easy to reach two of the most famous Croatian national parks. One of them is the beautiful national park Kornati. According to the legend, the Kornati islands were created by white stones that remained after God had created the world; He threw them into the sea and decided that no alterations were necessary. Indeed, the miraculous Kornati archipelago is unique in its beauty and attractiveness. So many reefs, headlands, islands, and bays can be found nowhere else.

The other national park you can visit easily from Vodice is the National Park Krka. In this national park, you can find one of the most beautiful waterfalls; Skradinski Buk welcomes visitors with its seventeen steps where water flows and flows. This national park is great during hot summer days since you can go for a swim there.

In Zadar area, you will see a natural phenomenon of two equally beautiful, and yet so different blues. On the one hand is the beautiful Adriatic Sea and on the other Croatia’s biggest natural lake. Around this beautiful lake is the nature park Vrana Lake. The dominant feature of the park is a special ornithological reserve.

If you like birds you can also visit the falconry Centre located in a pine forest in Dubrava, only 8 km from the center of Sibenik.

From Vodice you can also visit some of the bigger cities along the Adriatic coast like Sibenik, Zadar, Trogir or Split. If you prefer smaller coastal towns you can visit Vodice, Rogoznica or Primosten.

Where to eat in Vodice

When you are in Vodice, and in Dalmatia generally, you should not miss trying some of the amazing fish dishes. In the fish restaurant Burin you can try excellent fish specialties with fresh fish overlooking the picturesque bay, and toast a glass of the best Croatian wines!

If you are looking for typical Dalmatian atmosphere, you should not miss visiting one of the konobas (traditional Croatian tavern). In Dalmatian konobas you can try excellent domestic food, prepared with fresh ingredients. One of these is the Konoba Drazi which offers great traditional food.

You can also visit one of the pizzerias in Vodice, like the pizzeria Spalato which is located at the promenade of Vodice.

The ACI Marina Vodice is situated in the northeastern part of the Vodice harbor (Vrulje cove), protected by two breakwaters. Fulfilling the strictest environmental standards in terms of safety and cleanliness of water and environment, ACI marina Vodice is one of 10 marinas from ACI which is given a high award “European Blue Flag”. The marina is open whole year round and has 290 berths and 60 boat places on land. Berths have water and power supply. It also has a reception desk, a currency exchange, a supermarket, a coffee bar, a restaurant, sanitary facilities (showers and toilets) and much more. 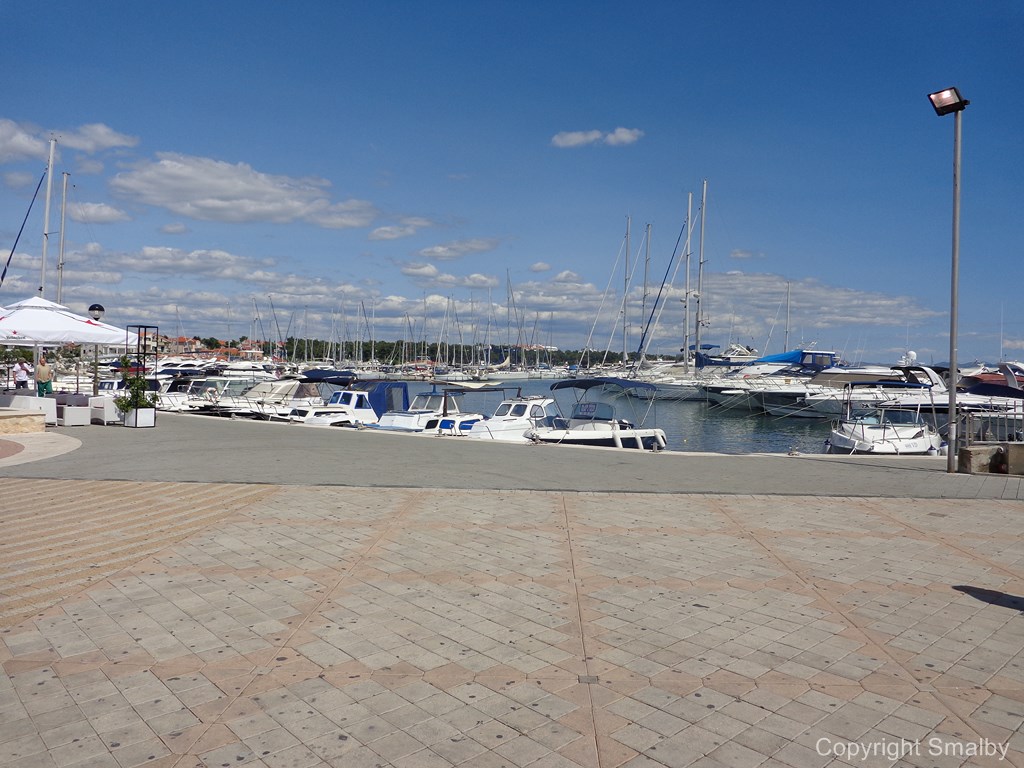 For a small coastal town, Vodice offers actually quite a few possibilities. The Hacienda club is located only two kilometers from the center of Vodice and it is a very well known place in and outside Croatia. It is one of the biggest clubs in Croatia, with a capacity of 2000 people and it is special because it is located in the open – you can dance and watch the stars at the same time.

Another popular place is the Hookah Bar. Two luxury lounge bars, one on each of the most famous beaches is forming the Hookah Bar. This is the perfect place to prepare for an evening in Hacienda, with a chill atmosphere. The after beach parties which are held daily from 17:00 to 21:00 are very popular. 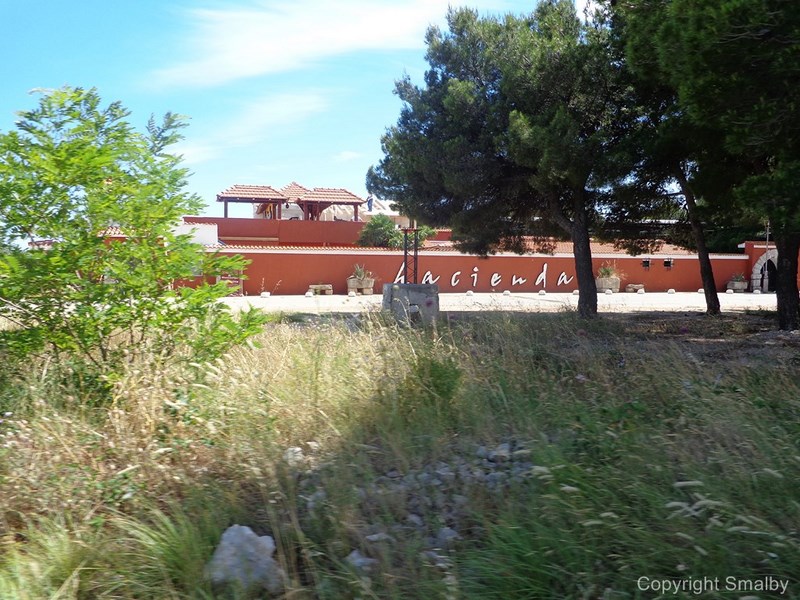 During the summer months, there are also plenty of other festivities. At the heart of the season the biggest festival in the region, the Vodice fest takes place. The highlight of the festival is the beautiful fireworks. The view from the promenade is breathtaking. After the fireworks, relax with the most famous Croatian artists. Visit many booths where you will find a large selection of drinks and food.  In July the Jazz festival is held every year. It lasts two days and offers you an unforgettable jazz experience. Don’t miss out on CMC Festival held each year by the Croatian Music Channel as well.

How to get to Vodice

Vodice is easy to reach by any means of transport. If you are traveling by your car, you can take the highway exit Sibenik. Or you can use the coastal road.

If you are traveling by bus it is also no problem to reach Vodice, since the town is very well connected with all bigger Croatian cities. Everyone traveling by plane can choose between Zadar or Split airport and from there continue the journey by bus to Vodice.