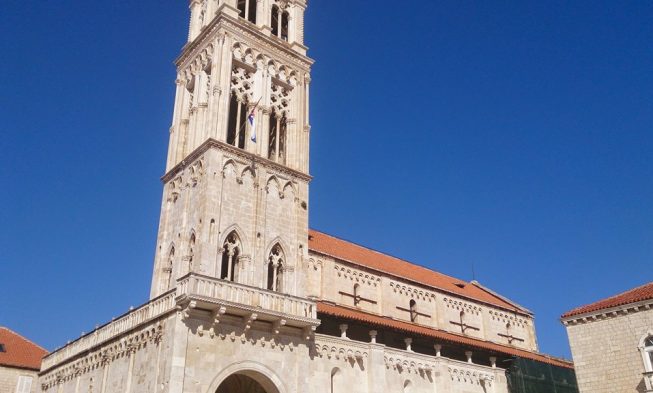 Trogir, one of our favourite towns in Croatia, is located 27km north of Split. The town’s history goes back for more than 2000 years, as the Greeks founded a colony here in 3rd century BC. Thanks to its strategic geographical position between the mainland and the Island of Ciovo, Trogir was an important spot for all of the foregin conquerors of the Adriatic coast. It is no wonder that over the years Trogir belonged to the Greeks, Romans, Venetians and even French, and all of these cultures contributed to the cultural and historic heritage of Trogir.

Today Trogir consist of 3 parts, the mainland part, the Old Town Island and the Ciovo part of Trogir. In 1997 the Old Town of Trogir was inscribed in UNESCO World Heritage List. The Medieval core of the Old Town surrounded by stone walls also has one of the highest church densities in the world, as well as beautiful Romanesque, Renaissance and Baroque buildings.

Trogir is a very popular tourist destination, with more than 20.000 beds, tourism is the most important economic factor in the Trogir region. Trogir was one of the first cities I visited here in Croatia. It is important to notice that Trogir municipality banned neon lights and posters from the Old Town so they wouldn’t ruin the atmosphere of this ‘museum town’. This seems to be a wise decison, considering that the income from tourism makes up more than 50% of the municipal budget. In the last few years Trogir had also been used as a location for several television productions, such as the British TV series Doctor Who, and the popular HBO series Game of Thrones which also helped the town’s popularity.

If you plan to visit Trogir in July and August you should book your accommodation in advance, since Trogir is a popular summer resort most of the hotels, hostels and appartments will be occupied.

What to see in Trogir

Of course the Medieval Old Town is the main sight in Trogir, and most of the attractions are located inside the town’s walls. The sights that you should not miss are the following:

The Old Town is dotted with numerous restaurants, mostly concetrated around the riva, main square and in the Blaženi Augustin Kažotić street (marked with a blue line on the map below). Although I visited a few restaurants I cannot recommend any particulary, except the restaurant Capo with its excellent ambient. But here are some other popular restaurants:

Also make sure that you don’t miss Đovani, a ice cream shop hidden in the centre of the Old Town, serving great gelato and cakes.

Trogir has 4 paid parking areas, three of them are located on the mainland side and the fourth one is located just after you pass the bridge from the mainland, to your right. There are also a few parking spaces on the Ciovo site of the town.

Parking fees vary from 5 to 20 kuna (€1-3) a hour, the closer to the old town the more expensive it gets, I have marked all 4 parking places on the map below, my recommendation would be to take parking number 2 or 4 (8 kuna/hour), from there it is a short walk to the Old Town.

The most popular beach around Trogir visitor is the Okrug Beach on Ciovo island, aslo called Copacabana Okrug Beach. You can reach it easily from the Trogir centre by either car (5km) or a boat ferry, price is around 10 kuna (€1.40) (more info on the ferry here).

Pebble and sand beach Pantan is located 2km from the town center, in the direction towards Split. You can enjoy the short walk to the beach or take the bus nr. 37 and get out at the second stop. During the summer you can get your cold drinks at the beach bar Mosquito. The beach got its name from the Pantan river that recently became a nature reserve is noted as one of the last surviving marshlands on the east coast of the Adriatic. Near the beach you can find the Renaissance millhouse situated on the river. Today the millhouse, ‘Mlinice’ is a popular resort and a restaurant.

The Medena beach is also one of the more popular places, it is located 4-5km from Trogir in the direction of Primošten. You can reach the beach with any of the buses going from Trogir to Medena (lines 47,48 and 49). Medena is a larger resort area with hotel and apartments located in Seget. The beach and hotel Medena offer a great varity of sport activities, such as water slides and volleyball and soccer pitches.

And, of course, there are plenty of small “private” beaches around the Ciovo island, to reach most of them you would need to take a car. Althrough Slatine, a village on the island of Ciovo with another remarkable beach can be reached by bus. So, hop in your car or the local bus and try to find a little cove of your own!

Transport to and from Trogir

By Car: If you are driving to Trogir from the A1 Motorway exit the Motorway in Prgomet, from there you have around 15km to Trogir. Alternatively, when coming from North, you can exit the motorway in Šibenik and follow the coastal road to Trogir. This would take about one hour but it would give you a chance to enjoy the scenery or maybe visit another little town or two.

From Split to Trogir its is a 25-30 minute drive, during the summer it can take longer because of the traffic.

By Plane: The Split Airport in Kastel Stafilic is only 6km from the Trogir centre. If you wish to take a taxi to Trogir it would cost you about 100 kuna, but you could take the bus nr. 37, the one way ticket form the airport to Trogir costs 13 kuna (€1.80).

By Bus: The best way to get from Split to Trogir is to take a direct bus which leaves from the main bus station in Split (Autobusni Kolodvor opposite the ferry harbour). From 5 AM till midnight there is 1-3 buses leaving every hour and the journey lasts about 30 minutes.

If you are going from Trogir to Split and vice versa, avoid taking the local line nr. 37, as the ride usually lasts an hour and in the summer months even more. If you are taking the bus from Trogir, you can see the location of the main bus station in Trogir on our map below.

If maybe you are heading towards Primošten or Šibenik there are several buses leaving from the main station in Trogir.

By Boat: There is a ferry line (boat) that goes from Split to Slatine and then to Trogir. You can check the timetable here, the boat goes more often during the summer.

One way adult ticket from Split to Trogir or the other way around costs 30 kuna, and for children from 4 to 10 the ticket costs 15 kuna. We recommend the following one day excursions:

Fish picnic: During the main tourist season a number of travel agencies offer different fish picnic day trips. You can book your trip on the riva and the excursion boats usually leave from there.

Trip to Split: Take ferry to Split in the morning and explore the old city. Enjoy your morning coffee on Split riva and make sure to explore the Diocletian’s Palace. Here you can find inspiration for your Split trip.

National park Krka: If you travel by highway it will take about 1 hour to get to Krka. There are also available excursions that you can book in Trogir. Here you can find our guide on the Krka Waterfalls National Park.

Coastal trip: Take a car drive along the coast and make sure that you stop by cities like Marina and especially Primošten. Here you can have lunch or go to the beach and then continue towards Šibenik where you can see UNESCO World Heritage Site, the St. James Cathedral. As I mentioned earlier there is around 20.000 beds available in the Trogir municipal. Before you book your accommodation there are some things you should know:

Accommodation in the Old Town is limited and usually the more expensive option.

Many of the hotels are located outside the Old Town and on the island of Ciovo. On the mainland there is plenty of accommodation options along the main road and in Seget, a nice little village just few kilometres from Trogir.

Most of  the accommodation options can be found on island of Ciovo, e.g. in Okrug Gornji and Arbanija, there are lots of new apartments houses, build in the last 10 years, and with the new bridge finally completed, getting to and from the island wont be a problem.

There are 4 campsites in the Trogir area:

Campsite Vranjica Belvedere: Situated about 5km west of Trogir , you find the 4 star rated campsite Belvedere. The 451 pitches are located on terraced terrain with magnificent view of the sea. The camp is also well equipped with modern facilities, exchange office and they also offer a shuttle boat to Trogir riva.

Campsite Rožac: Located on the island of Ciovo, 2km in the direction of Okrug Gornji, this 3 star campsite is equipped with good facilities and most of the pitches are in dense shade of pine trees. Capacity of Campsite Rožac is around 550 people.

Campsite Labaduša: Labaduša campsite is situated in the southern bay of  the island of  Ciovo , close to Okrug Gornji. This 2 star rated campsite offers space for around 400 guests.

Campsite  Seget: Situated just 2km outside of Trogir, this 2 star rated camp has space for around 300 guests.

On the map below you can see all the places we mentioned. If you have any questions about Trogir, or vacation in the Trogir area, feel free to contact us for advice.