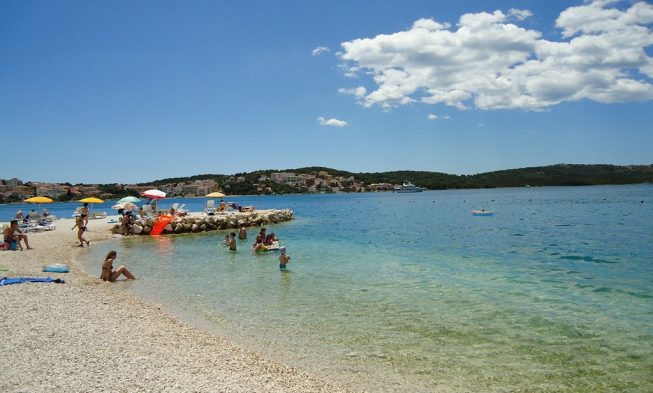 Ciovo is a small island in central Dalmatia. The island is connected to the centre of Trogir with a bridge which used to be a bottleneck during the summer months, causing problems to both tourists and locals. This used to be a major problem, especially in the summer, but since the new Ciovo bridge finally opened on 17th July 2018 reaching the island of Ciovo became faster and easier.

There are plenty of easy and fast options to get to and from the island (see below). Island Ciovo is a very popular holiday resort especially for people who like to spend their vacation in self-catering apartments. The villages Slatine, Arbanija and Okrug Gornji are the most popular destinations. There and in the rest of the villages on the island you can find a wide selection of private apartments, but also smaller hotels and guesthouses.

Here you can see a large selection of accommodation on the island:

Getting to Island Ciovo by Car

If you are coming from north you can either follow Dalmatina A1 Highway to exit point Prgomet, from there it is about 15 km to the island. Second option is to follow the coastal road from Sibenik to Trogir.

If you are coming from the south via highway, you should exit in Dugopolje / Split, from the exit point there is about 35 km to Ciovo. If you are travelling by the coastal road from Split just continue in the direction of Trogir.

Getting to Island Ciovo by plane Alternative airport, well second closest airport, is the one in Zadar.

Getting to Island Ciovo by boat / ferry

There is NO car ferry route to Ciovo.

From Split you can use the Bura Line, a passenger boat sailing on the route Split – Slatine – Trogir and vice versa; you can see the timetable and prices here. EASY Transport: from the seaside promenade in Trogir there are frequent boat lines (app. every 15 minutes) to Okrug Gornji, a one-way ticket costs about 10 kuna. The boats stop at the Marina in Okrug, which is between the main beach and the center of town. During the main season there are also fairly frequent boats to Slatine from the seaside promenade.

Should you have any questions about travelling to Ciovo, please feel free to contact us here.

Getting to Rab Island
Getting to Croatia, Guide, Island, transfer