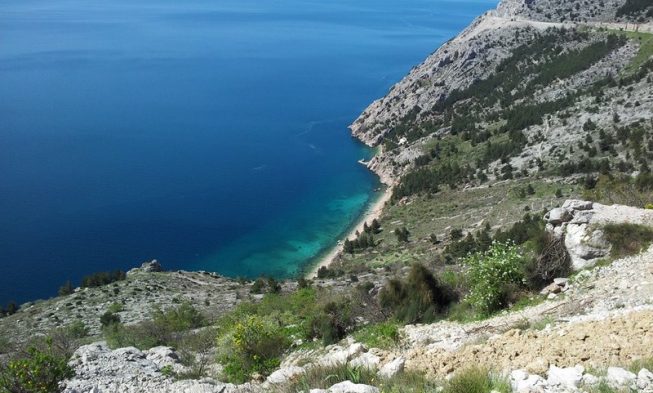 Dalmatia is a geographical and historical region on the east coast of the Adriatic Sea, in the south and south-east of Croatia. The region stretches from Tribanj in the north to Konavle in the south. The main cities are Split, Zadar and Dubrovnik. It is known for its rich cultural and historical heritage and breathtaking nature.

The name Dalmatia exists ever since the first century and bears the name of the Delmats (Dalmatians), a tribe of the Illyrians. The space that Dalmatia occupies has changed significantly over time, the historical region of Dalmatia extended temporarily to Bosnia and Herzegovina, Montenegro, Albania and large parts of Serbia.

The region is usually divided into three parts; North Dalmatia with Zadar as the main center, Central Dalmatia with Split as the main center and South Dalmatia with Dubrovnik as the main center. In whole Dalmatia, there are little less than 860 000 inhabitants. Outstanding natural beauty of the region, crystal clear sea, amazing beaches as well as the great historical value of the cities have made Dalmatia one of the most popular tourist areas in Croatia. The  Mediterranean climate with an average winter temperature of 6ºC and an average summer temperature of 24ºC makes it even more popular with tourists. Don’t get confused by these average temperatures, summer in Dalmatia is typically hot and sunny. What is more, there are over 2600 hours of sunlight per year.

Dalmatia has a potential to develop into an world-known and popular holiday destination primarily to its beautiful and often untouched nature. In Dalmatia there is so much more than the beautiful Adriatic Sea and the amazing beaches along the coast, there are also other natural attractions that are worth visiting. The four national parks that are situated in Dalmatia attract a growing number of domestic and foreign tourists.

The National Park Krka covers an area of 109 km² of the river Krka between Knin and Skradin. This national park was founded in 1985. The most impressive part of the park is the river and seven large waterfalls. It is a green oasis of emerald water with beautiful boardwalks through the park.

The Paklenica National Park is a national park in the Velebit mountain range, 30 km northeast of the city of Zadar, on the Croatian Adriatic coast. It has been a National Park since 1949. The highest peaks are Vaganski Vrh (1757 m) and Sveto Brdo (1750 m). The national park has a huge climbing area with over 400 routes of various difficulty. For those who are not into climbing, there are 150 km of marked hiking trails on which you get to know the diversity of the park.

The island of Mljet is situated near Dubrovnik, in a group of South Dalmatian islands, and the National Park Mljet covers its north-western part. It was founded in 1960. With forest coverage of 90 percent, Mljet is one of the most forested islands in the Mediterranean Sea. In the forests of the National Park, you can find many different plants and animals. Mongooses still live in the forests of the National Park, which are actually foreign species for this region. Mediterranean monk seals, which are among the most endangered mammals in the world, have been spotted near the island.

The Nature Park Telašćica is a nature park in Croatia situated at the southern tip of the island of Dugi Otok. The nature park is practically an extension of the existing National Park Kornati and among other things, it is famous for its high cliffs and the salt lake Mir. It is easily reached from the harbor in Zadar.

The Lastovo Nature Park has been a protected area since 2006 in the southern Adriatic Sea in South Croatia. The nature reserve includes the island of Lastovo and the surrounding archipelago. In total , 44 islands, islets and rocks are included in the Natural Park. An interesting fact about the Lastovo archipelago is the fact that there are no venomous snakes on the islands.

The Biokovo Nature Park was proclaimed as a nature park in 1981 thanks to its unique geomorphology, exceptional biological diversity and natural scenic beauty. The park covers an area of 196 km² and includes an approximately 30 km long part of the Biokovo Mountain from Dubci to Gornje Igrane.

The Nature Park Vrana Lake extends along the lake, from Pirovac to Pakoštane, only 1 km from the sea. The Vrana Lake is the biggest lake in Croatia. The water in the lake is a bit salty, as the sea also flows into the lake. The dominant feature of the park is a special ornithological reserve which has been given the status of a special ornithological reserve because of the preserved large reed area as unique wetlands of high biodiversity and an extraordinary scientific and ecological value in 1983.

Whole Croatia, and especially Dalmatia is well known and popular for its numerous and beautiful islands. In North Dalmatia islands worth mentioning are Pag, Ugljan, Pasman, Kornati, Dugi Otok and Murter.

The island of Pag is located on the Adriatic coast north of Zadar in North Dalmatia. Pag has a length of 58.25 km and with an area of 284.18 square kilometers it is the fifth largest island in the Adriatic. One may say that Pag is known for four things: the excellent lamb which is considered to be one of the best lamb you can get in Croatia, or even in Europe. The sheep’s diet consisting of grass and wild herbs combined with the high concentration of salt on the island, create a very special and unique taste of the island’s lamb . The second thing for which Pag is known is the Pag cheese made from sheep milk; again the sheep’s diet play an important role in terms of generating a very special taste, but also the fact that the cheese is rubbed in olive oil before maturing. The third thing which Pag is known for is salt. The last 7-8 km before you reach Pag town, on the left side you will see a large area of strange looking flat fields which is the production area of the company Salona Pag. The fourth thing Pag is known for is the famous party beach Zrce in Novalja.

The most known and most popular islands in Central Dalmatia are Brac, Solta, Hvar, Vis and Ciovo. Brac and Hvar are the biggest islands in this part of Croatia. Both are easily reachable by ferry from Split. Hvar is getting more and more popular as a party island while Brach is still a bit more quiet. Both islands are well known for their beautiful beaches. Talking about Brac, one has to mention the beautiful beach of Zlatni rat in Bol. The beach is a pebbly beach, it extends 500 meters into the sea and it changes the shape under the influence of winds and waves. It has been ranked as one of the most beautiful beaches in Europe. For a unique island island experience, Solta island is the right choice. Ciovo is the island connected by a bridge to Trogir town.

In South Dalmatia there are also plenty of beautiful islands which are absolutely worth visiting. Some of the islands in this part of Dalmatia are Korcula, Lastovo, Mljet, the Elaphites and the peninsula of Peljesac. The island of Mljet has been proclaimed a National Park due to its rich nature and beauty while the Lastovo archipelago was proclaimed a Nature Park. Both of them are absolutely worth visiting, especially if you like to enjoy your vacation surrounded by beautiful, untouched nature.

Dalmatia really is a perfect spot for your next vacation with its gorgeous sceneries, rich culture and history, amazing cuisine and entertainment.